Fans of Maker’s Mark may want to raise their glasses to this one– the signature red wax dripping that seals each bottle of the Kentucky bourbon was recently recognized as a distinctive, enforceable trademark.

On April 2, the United States District Court for the Western District of Kentucky issued an injunction preventing Diageo North America and Casa Cuervo from using a similar wax seal for tequilas sold in the US on the grounds that it would violate the trademark rights of Maker’s Mark, a unit of Fortune Brands.

Here’s a look at the bottles (via BourbonBlog.com): 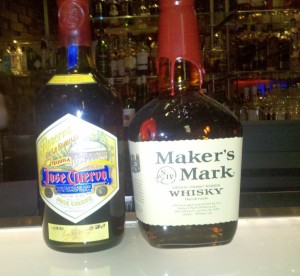 The seals at issue look fairly similar (both consist of red wax), although there are some subtle differences (drippings, imprintations, overall size).

It looks like Maker’s Mark was the first to use the wax seal.  According to the New York Times:”The Samuels family, which created Maker’s Mark in 1958, trademarked the distinctive seal, which serves only a decorative purpose.  Whereas Cuervo began using a dripping wax seal on bottles in 1997 to try to create an artisan look.”

At this point, some of you might be wondering why Maker’s Mark won.  After all, a wax seal is a wax seal– right?  Shouldn’t any liquor manufacturer that wants to place a wax seal on their bottle be able to do so without risking litigation?

Although there’s a tempting simplicity to this line of argument, it overlooks one important factor– functionality.

Here, the wax seal serves an ornamental, decorative purpose.  In other words, it’s not as though a federal court is telling Cuervo that it is not allowed to seal its bottles whatsover.  (That would be a messy propostion; feel free to insert a tequila-related joke here.)   Rather, what the court is saying here is that Maker’s Mark has established trademark rights through its use of a decorative feature, and that Cuervo’s use of a similar seal violates those rights.

Pretend for a moment that we’ve traveled back in time and wax seals were the most popular or expedient way to seal bottles.  Then, under the functionality doctrine, Cuervo would have a stronger defense on the ground that the seal was “functional.”  A product feature is considered functional when it is essential to the use/purpose of the article or if it affects the cost/quality of the article.  See Qualitex Co. v. Jacobsen Products Co., Inc., 514 U.S. 159 (1995).