The Hangover II enjoyed a record-breaking weekend at the box office, but not without a little help from U.S. District Judge Catherine Perry of Missouri.  Last Tuesday, Judge Perry declined to grant an injunction based on alleged copyright infringement, which would have halted the movie’s scheduled release.

The copyright battle started when S. Victor Whitmill, the tattoo artist responsible for Tyson’s famous facial tattoo, filed suit in the U.S. District Court for the Eastern District of Missouri, claiming that the similar-looking tattoo which the Ed Helms character receives in a Bangkok tattoo parlor infringes on his copyright in the design of Tyson’s tattoo.

Here’s a look at the tats at issue: 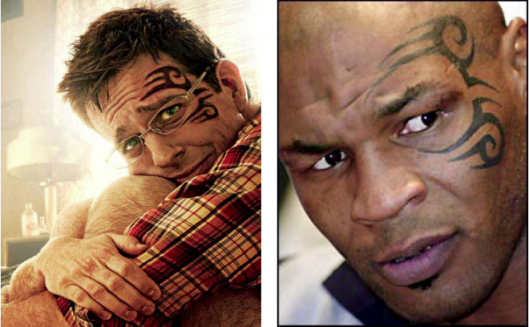 This is a fascinating case, and there’s been a lot of great coverage on the blogs.  Check out Matthew David Brozik guestblogging at Likelihood of Confusion here.  Over at Madisonian, Ann Bartow shares interesting observations on Professor Nimmer’s dual role as Warner Bros.’s expert witness and (as we know him best) author of the leading treatise on copyright law.

Lots of questions here.  First, does a tattoo constitute copyrightable subject matter?  There’s dispute over this point (from Prof. Nimmer’s filed declaration with the court):

The tattoo qualifies as an original “work of visual art” that may gain ”recognized stature,” with the result that a court may enjoin its destruction. See 17 U.S.C. § 106A(a)(3)(B). After a court invokes that provision to bar him from removing his tattoo, Mr. Tyson literally may not show his own face to the world; that is, he will be required to keep Mr. Whitmill’s handiwork spread across his face, regardless of his own desires. Copyright law thereby becomes the instrument to impose, almost literally, a badge of involuntary servitude, akin to the mark with which ranchers brand the cattle they own.

Then, if we concede (and the court already has), that a tattoo is copyrightable, what does that right protect?  Can the tattoo artist prevent Tyson from appearing in movies, commercials, etc., or are his claims limited to Helms (and other cases of similar-looking facial tattoos) only?

If the Helms tattoo is an infringement, the question then becomes whether Warner Bros. would be entitled to the affirmative defense of fair use.

And, finally, there’s been a recent claim that Whitmill’s rights in the tattoo may be weak in light of the design’s roots in Maori tradition (via TechDirt):

Professor Ngahuia Te Awekotuku, author of Mau Moko: The World of Maori Tattoo, described Mr Whitmill’s claims of ownership as insufferable arrogance. “It is astounding that a Pakeha tattooist who inscribes an African American’s flesh with what he considers to be a Maori design has the gall to claim that design as his intellectual property,” she said.

“The tattooist has never consulted with Maori, has never had experience of Maori and originally and obviously stole the design that he put on Tyson.

As an attorney, I generally think it’s good that cases settle.  But as a blogger, I’d really love to see this one play itself out a bit.