College football season is upon us.  This weekend, a lot of eyes will by on my alma mater as they take on Penn State in its first game in the wake of the recent scandal.  A lot of eyes will be glued to TV sets and filling the stands in stadiums across the country. And that means huge licensing money, especially for high-profile teams.   According to the Collegiate Licensing Company, collegiate licensing is a market currently valued at $2.7 billion a year.

With this much money at stake, it’s not surprising that universities are going to great lengths to make sure the valuable brands that underlie their sports teams are protected.  But as readers of this blog know, there have been numerous accounts in the media over the last few years of “trademark bullying” — instances where brand owners are seen as going too far in protecting their rights and risk alienating potential customers.

So where do we draw the line between good enforcement and “bullying”?  As with most legal questions, there’s often a lot of grey area, but I think consumers themselves provide a nice feedback loop.  (Which perhaps lines up with or could be explained by a consumer theory of trademark law.)

The University of Alabama came under fire recently after it sent a cease and desist letter to a local bakery demanding that it stop making cakes and other desserts bearing the university’s logos.  After a widespread show of support for the bakery, Mary’s Cakes & Pastries, the university changed its tune and (get this!) apologized to the bakery for sending the letter.

This might leave some lawyers scratching their heads, but marketing and PR folks would see this as a no-brainer.  Why would you want to alienate the very people you’re hoping will fill the stands each fall and buy your official merchandise?

I think it’s fair to draw a distinction between the Alabama cookies dispute and, say, an instance where someone is selling knockoff t-shirts that compete unfairly with officially-licensed merchandise.  But what about the “zone of expansion” argument and the “duty to police”?  Even though I think Alabama did the right thing from a PR standpoint, would they have an argument that baked goods are a market to which they’re likely to expand or that they can’t acquiesce to the bakery’s use for fear of losing their rights?  Should they?

Those are the thoughts to chew on.  But, thankfully, what could have been another story of trademark bullying had a happy ending.

That may be the lesson in Cincinnati, as the University of Cincinnati takes on Baba Budan’s Bearcat Café, a small café near campus, for its use of the word “Bearcat.”

Before we get started, I should mention that, despite all my cheerleading for Pittsburgh, I am actually a Cincinnati native, and my sister is a University of Cincinnati graduate.

The Bearcat Café opened its doors in 1959, nearly 30 years before the University acquired any registered marks pertaining to its mascot, but exactly 40 years after the University adopted the Bearcat as its mascot.  The café (originally more of a bar, now more of a café in the stricter sense of the word) has changed hands over the years, but each successor has kept the “Bearcat” name in use and left the old neon sign up on the wall.   From the Cincinnati Enquirer:

[The current Bearcat Café owner] said he hasn’t hired a lawyer yet and is “keeping our options open.” He’s optimistic his café could beat UC in court because it first registered the Bearcat Café name under Ruane in 1959, while UC’s trademarks date to the late 1980s. 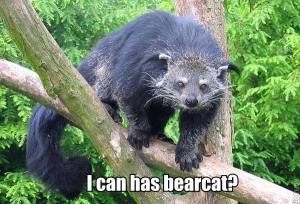 In any case, this seems to be the oldest registration belonging to the university.   It’s not immediately clear what the 1959 “registration” referred to in the article is (USPTO searches for “bearcat cafe” do not yield any results), but I did find a 2004 Registered Trade Name filing with the Ohio Secretary of State.

It will be interesting to see how this will play out.  There are a couple of issues in play.  First, there’s the question of the common law rights of the Bearcat Café, and whether these rights might ultimately be trumped by the University’s.  Second (and related), there’s the question of how strong the common law rights in “Bearcat Café” actually are in light of the fact that the business has rebranded itself at Baba Budan’s Bearcat Café.  Again from the Cincinnati Enquirer:

But [University spokesman Greg] Hand said UC is challenging Hamburg’s use of the name as the new “Baba Budan’s Bearcat Café,” which was registered with the state in 2004 when the café reopened after an eight-month renovation.

By that time, Hand said, UC had clearly established its trademark and its right to the Bearcat name.

Another question that might be relevant here is what role will custom play?

Reading this story immediately called to mind two examples of college town establishments that bear the nicknames of their school’s mascot.  Here in Pittsburgh, it’s the Panther Hollow Inn (which oddly has a bigger Carnegie Mellon crowd many nights).  And in Columbus, Ohio, it’s the inimitable and possibly life-changing (can you tell I’ve had them before) Buckeye Donuts.

I’m not sure if either of these examples are cases where the university has licensed use of the school nickname, but I suppose that custom here could cut both ways.  On the one hand, if licenses are common, that would favor the University of Cincinnati.  But, on the other hand, if licenses are uncommon, things may be looking up for Baba Budan’s Bearcat Café.

The banner photo above is courtesy of Ross Mantle Photography: http://rossmantle.com/